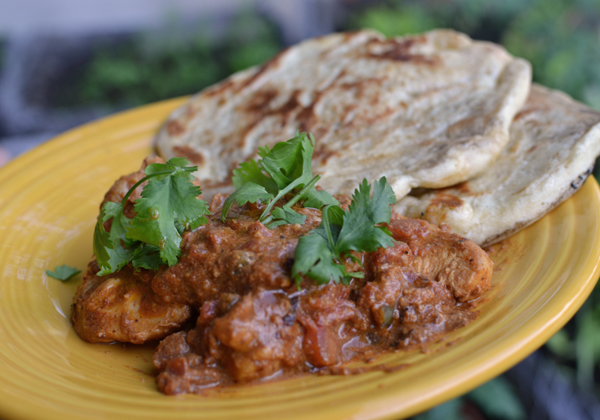 We had an interesting combination this week where Jeth’s birthday coincided with us having run out of our budgeted grocery money way too early in the month.  Sometimes popsicles and chocolate bars are just too tempting for our own good.  Birthday dinners should still be special, though, so we were challenged to come up with something exciting, delicious, and cheap.Our original plan was to go hiking at a local state forest (actually the one where we were married) and grill out.  I figured that since we’d be grilling, this was a perfect opportunity to try a newish recipe.  Chicken tikka masala isn’t quite a curry, but isn’t entirely not a curry.  It is yogurt and spice marinated chicken, grilled and then stewed in a spicy tomato and cream sauce.   It’s Indian, and includes a lot of the same spices as we use in curry.  But it’s in a class all by itself.  A spicy, savory (and somehow sweet), tangy, and creamy class.  And did I mention it’s cheap? If you’ve got some spices on hand (and they’re not even exotic spices), this recipe can be made for under $5.Our hiking and grilling plans were cancelled by a surprise thunderstorm, but we found that this recipe worked really well in our large cast iron pot on the stove.  A cast iron skillet cooked the naan to perfection, and by the time dinner was made the rain had cleared off and we were at least able to eat outside.

In a small bowl, mix the marinade ingredients together.  Add the chicken and stir until it is evenly coated.  Cover the bowl and place it in the fridge for at least an hour.

While the chicken is marinating, melt the butter in a large pan.  Add the garlic and jalapenos and saute for a couple of minutes, until they begin to soften.  Add the spices, and then the tomatoes and cream.  Simmer the sauce over low heat until it begins to thicken.  Set the sauce aside until you are ready to cook the chicken.  (The sauce can also be made in advance and refrigerated for a couple of days before using.)

When you are ready to cook the chicken, preheat your grill or dutch oven to high heat.  If you are grilling the chicken, you’ll want to thread it onto skewers.  Cook the chicken until it is 80% done, then place it in a large saucepan and cover it with the sauce.  (If you are using a dutch oven, just add the sauce to the pot you cooked the chicken in).  Simmer for 10 minutes or until the sauce has reduced and darkens up.    Top with sprigs of cilantro and serve with butter naan.

Mix the yeast, water, sugar, egg, milk, salt, flour, and spices in a large mixing bowl.  Stir until the dough pulls together.  Turn the dough out onto a lightly floured surface and knead it for about 5 minutes, until it is elastic and no longer sticky.  You may need to add a little extra flour to keep it from being too tacky.  Lightly dust with flour and cover with plastic wrap, and leave to rise for about an hour.

Once the dough has doubled, punch it down and divide it into fourteen small balls. Sprinkle the balls with flour, cover with plastic wrap, and let rise for 30 more minutes, or until they double.

While the dough is on its second rise, preheat your grill or cast iron skillet to high heat.  One by one, stretch the balls of dough into 4-6″ rounds. It’s okay if they are uneven  – too much handling (or rolling them with a rolling pin) will knock too much air out and they won’t be nice and bubbly.  Cook the dough for about 2 minutes, until the bottom is puffy and dark brown in spots.  Brush the uncooked side with butter, flip the naan over, and then brush the cooked side with butter.  Let the naan cook on the other side for a couple of minutes, until the bubbles/raised spots are dark brown.  Naan is best served warm, so cook them up right before eating (or while the tikka masala is on it’s final simmer). 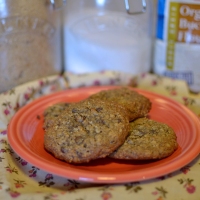 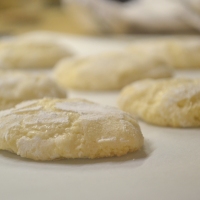